I seldom complains about things in my life here in my blog because I don't want to keep bad memories.

But today, I decided to have a good release here!!! A post about dishonesty, trouble, unfairness and whatever negative things you know off.

Last year December, just a few days before New Year, my car got hit by a person that I kinda know. Not really friends, it's like owner and clients relationship. 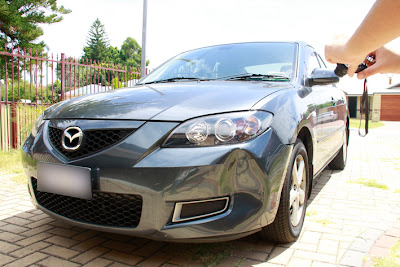 Okay, the story goes like this.
I went to their house at night to get something fix. I parked my car behind 2 cars diagonally.
I'm very sure my car has no dent or anything before I walked into the house.

So, I got in, talk to girl who fix the thing, then about 10 minutes later, her boyfriend said that he is going out. Weird thing is.. when he told her, he was outside the house talking through the window (to her room) to her. That time I was wondering why did he tell her through the window and not the room door? Anyway, just a thought. So there he went.

5 minutes later, I say bye bye to the girl, as I was walking out towards my car, I saw a huge dent on the front bumper! 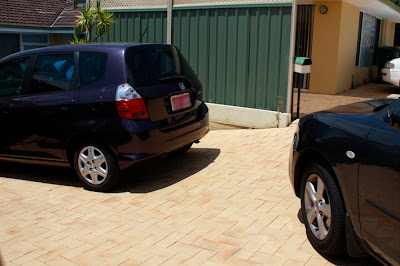 I was like in a freaking SHOCK! Where the hell this one came from??
Instantly, I look straight to the car in front of me, there are some light scratches. It was dark. So what I did was reverse my car a little and turn the headlight on! Now I can see the scratches clearly. It's not a big scratch or anything but that time, when I touch it, I definitely feel sandy.
I was curious for a while, this is her car, nobody drove it or anything but why there's scratches? and coincidently her left side back bumper scratched and my left front bumper dent and scratched?

If we talk about physics, this is totally logical. A move car reversed into a parked car = the parked car will get all the shit and move car will be alright.

I was being reasonable right?? Not trying to blame them or anything!

So I went knocked on the door, asking her if her car got scratched before, she was in doubt!
Err.. err.. hmm... <-- that's her response.
Showed her car scratches and she was wondering why she got it.

Then I showed her my DENT! She got a shock. I'm not blaming her! She was with me the whole time but what I suspect was her boyfriend!

We couldn't ask him at that time because he was out and the phone was at home. So I went home with that freaking dent.

Got home, and show it to Joe. He was very certain the dent wasn't there too the whole day! He had a closer look and found some purple paint mark on my car. He instantly asked me to call her and check what colour is her car. Guess what? It's PURPLE.

Okay, honestly, how many purple car in Perth!??! I can say Purple is a pretty unique colour for a car.

By that time, that guy called me back and asked me what happen. I told him the dent and he said he didn't know anything about it.

Seriously?? I got there 15 minutes and my car got a dent! You are the only one that drives out! You have her car keys! It was super dark and my car was dark too! I'm pretty sure you were blind that time and reverse her car into mine! Not surprise at all!

Joe and I drove all the way back there to talk about it. Hoping he will tell us the truth.
Expected, he didn't. He lied all the way again.

Look at the scratch mark guys..
My car... a big purple mark on the left and 4 purple lines on the right. 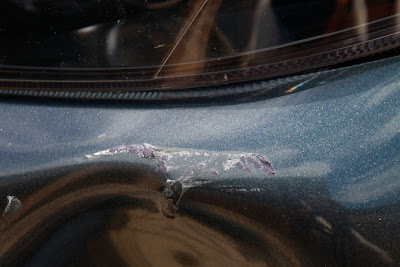 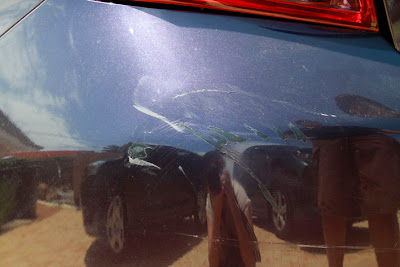 Isn't it obvious?? I think it is damn obvious.

The photos was taken in the morning the next day when it is clearer. Her car's scratches were smooth. He / she basically cleaned off the evidence.

I did report to the insurance and did a online police report. Hoping the insurance can help me with it. I'm under Swann Insurance. Didn't hear anything from them til the following week. I didn't drive my car at all for the whole week because I was waiting for the Swann Insurance to give me a call to tell me they will send a inspector to inspect my car. Instead of that, they rang me and asked me to drive to the panel beater and get a quote.

So I did it. The next few days, I got an email saying I can continue to pay the excess and get my car fix. I was in shock! Why do I have to pay for the excess when it is not even my fault?! It's not like a hit and run! I actually know that person!!!

I was really upset. VERY UPSET. I resend the photos and email them the details hoping they can check it properly this time and hoping they can ask an inspector to see who's actually at fault.

Swann Insurance let me down. They didn't have the inspector to check. They just rang me and said there's not enough evidence to proof that he actually hit my car. and told me that the car is blue, not purple. WHAT THE?!?! R U COLOUR BLIND?? You didn't even bother to come and check and you said her car is blue?!

If you measure it, their bumper can actually fit into the dent on my front bumper! Just nice!!! 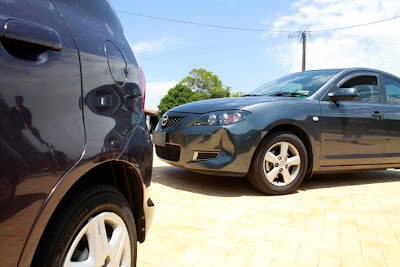 I am really disappointed. Disappointed I didn't get the justice that I want. Disappointed at my Insurance company because they didn't do their job properly. Disappointed I'm letting the liar run free. (They are probably laughing at me right now)

From what people tell me, SGIO will send an inspector to check the cars to see who's at fault and there's these other insurance company too that did a great job. Why is mine not?

I am considering to switch to other insurance company after paying that stupid excess to get my car fixed.
As if I'm rich. FML.

God, if you can hear me, please make all these liars disappear in my life. PLEASE! I don't want to see them ever again!!! :`(

Email ThisBlogThis!Share to TwitterShare to FacebookShare to Pinterest
Labels: Personal

I know angel.. I'm really disappointed because I can't do anything. What I can do is just let go.

Oh no I'm sorry to hear bout this... have you made a police report? It's not really an accident report anymore, it's also about someone committing a crime n denying it.

On the bright side, many people had to lose a lot more to have so many fraudsters revealed in their lives. At least you're safe and no one was hurt. Hope you get this sorted, good luck!