Enter At Your Own Risk

Happy Halloween to everyone!!! I know it's tomorrow but I think everyone should have celebrated it already since it's the weekend :P 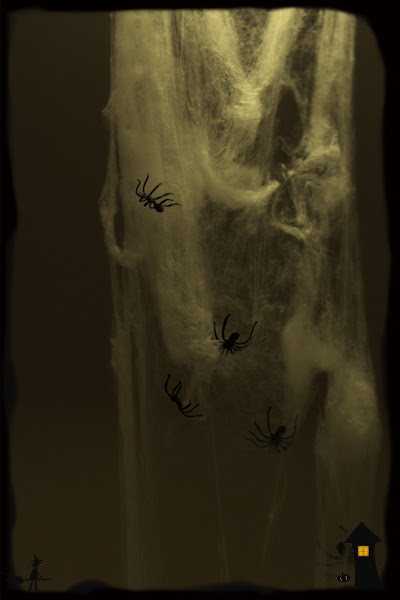 Oh my god I had so much fun preparing for the Halloween/birthday party! Since our friend Alan's birthday is near to Halloween, Jenny and I kinda decided to have a Halloween themed birthday party without Alan's permission. Ops! Probably not a good idea but hey, it turned out awesome! 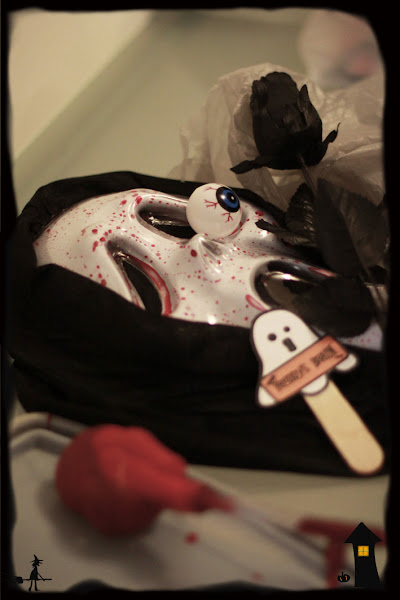 Since it's Alan's birthday, I've tried to make the food and decorations as cute as possible so it won't scares him off :P
I've designed some food labels for the dishes and came up with some weird names for it.
Printed and cut some bats, scary house and some other things to decorate it on the wall to give the house an effect of eeriness. I think I've done well for my first Halloween Party hahaha 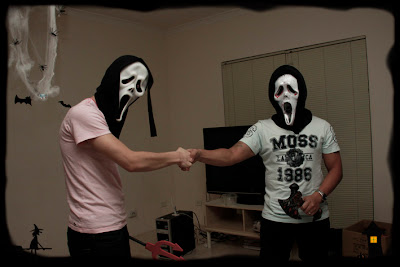 Some of our friend's done a good job on their costumes! Like these 2 buddies from the Scary Movies! and the Count Dracula from Sesame Street~! 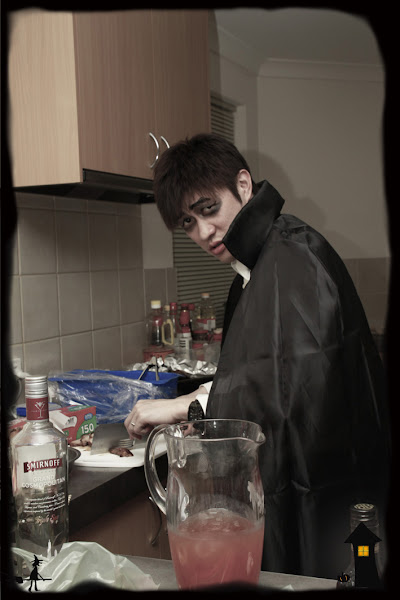 Now, time for Halloween Party food! This is the most interesting part of it!
Food! FOOD! FoOd!!!
Keep your jaw close, ok? haha :D 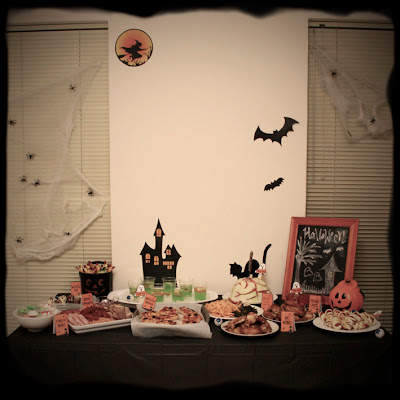 I researched for the Halloween food recipe from Google inside out & upside down and managed to compile some of the good recipes. So if you are interested to make some for your party in the future, I've attached the links to some of the sites for recipes. 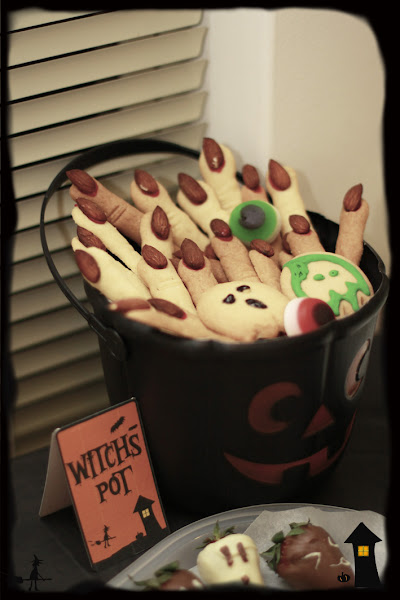 These cookies are absolute winner! Not only it look scary, it tasted so so good! Everybody loves it & I got so much praise from everyone! Not too sweet and not dry! One of our friend loves it so much, she come to me while munching the cookie and said "I ate a pair of hands already.. it's so good.."
Awwww... she can have as many pair as she wants~~~ hahaha 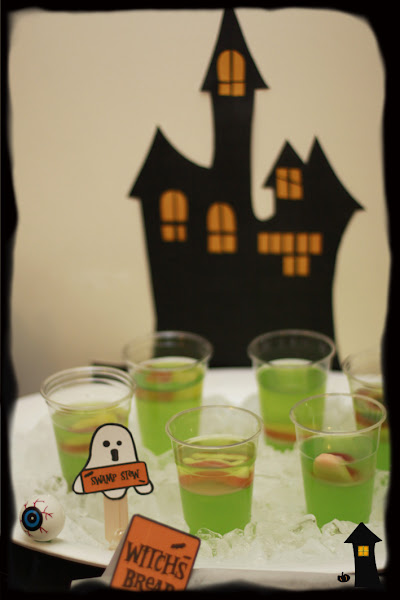 No this is not stew. It's actually Lime flavoured Aeroplane Jelly and some halloween lollies that I bought from Kmart. I'm sure you know how to make these haha. The only thing that you need to have is 2 boxes of Aeroplane Jelly to make 6 cups of jelly. Melt the jelly powder, pour half into the cup and let it set (for the first box). After about more than an hour later, top it with lollies and the second box of aeroplane jelly (same process as the first one). Then let it set in the fridge. If you didn't let it set for the first half of the jelly, the lollies will sink to the bottom and it won't look nice :) 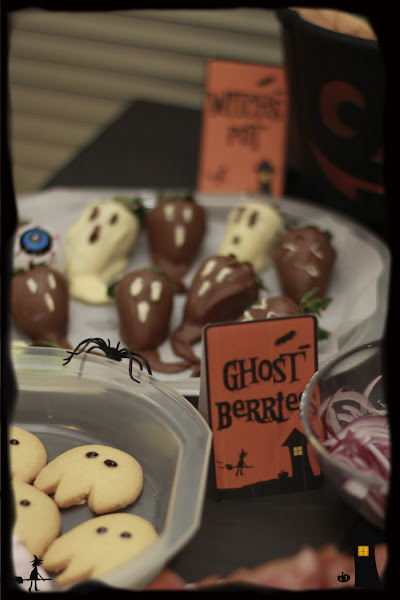 This dish is pretty much quite straight forward. Make a swirl on the baking paper, dip the strawberry into the melted chocolate and placed it on top of the swirl. Let it cool and wait for the chocolate to set. Then dab on mouths and eyes with the flat end of a toothpick dipped in melted white or dark chocolate.
The recipe requires us to use parafin wax. I didn't because I can't be bothered :P 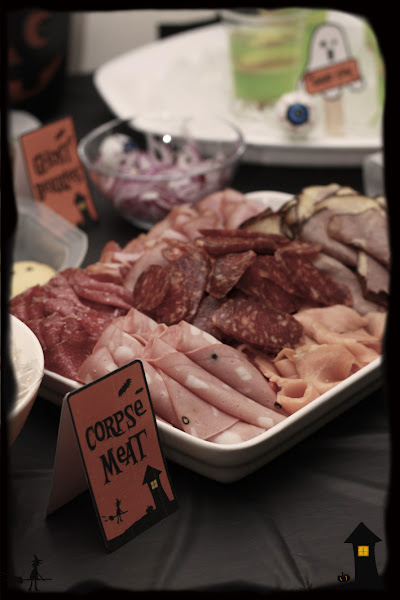 We didn't make this. Alan bought it because he wanted to eat this while playing drinking games with the guys. Silly boy :) 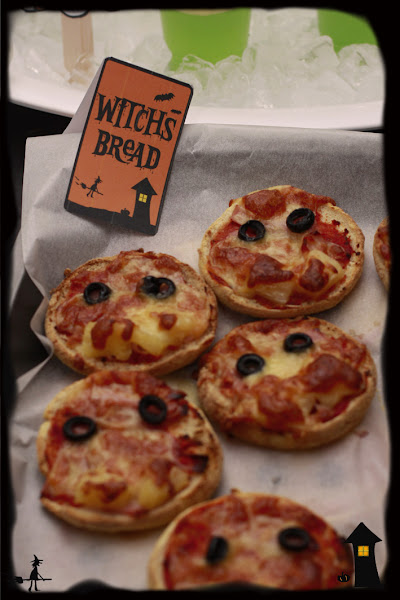 Jenny made some mini pizza for us! Not sure which recipe she refers to, but basically this is a very easy pizza to make and tasty too! Get some English Muffins from any supermarkets, spread some tomato sauce (pick the nice ones for pizzas) sliced olives, pineapple, ham and cheese! Then bake it :D
Easy isn't it? 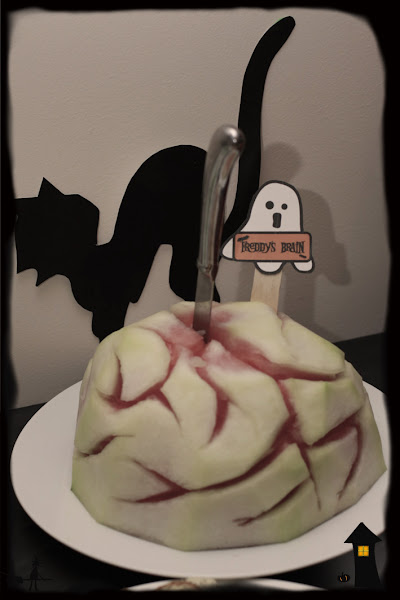 This watermelon is a head turner! Definitely look like a brain! Oh and excused my rough cutting skills. I had to cut this in like 10 minutes because everybody arrived. I think it looks good with a knife hahaha.

Who is Freddy? He is from the TV series called Freddy's Nightmare! I watched it when I was young and got so afraid of the dark! I don't even dare to go to the toilet alone! But I enjoyed the Freddy's Nightmare computer game though. I played nearly everyday after school when I was primary. haha miss those times. :P

Why do I call it Freddy's Brain? This is because there's one episode of him eating ... hmm....
Okay, I don't think I should share the awful and scary Freddy's story with you now.. I'll skip this and tell you next time if there's a chance hehe 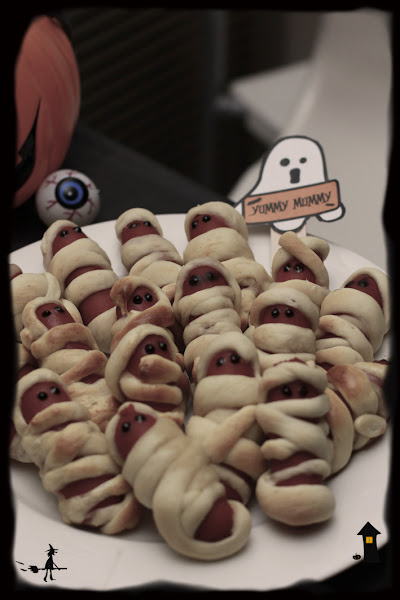 Another winner! I know someone ate 8 pieces of this that night cuz she loves it so much. I didn't follow the recipe from the site because I can't find the frozen breadstick pastry. I used the Sweet Bread Dough recipe from my recipe book instead. :D Found some links for the sweet dough recipe here. 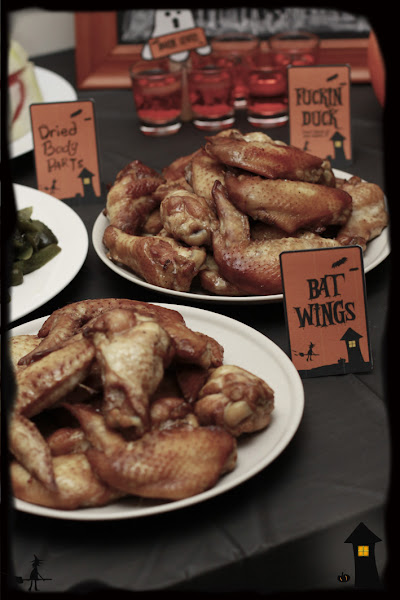 Joe prepared some baked chicken wings. You can make any flavour you want for this and can just call it Bat Wings haha. Easy! 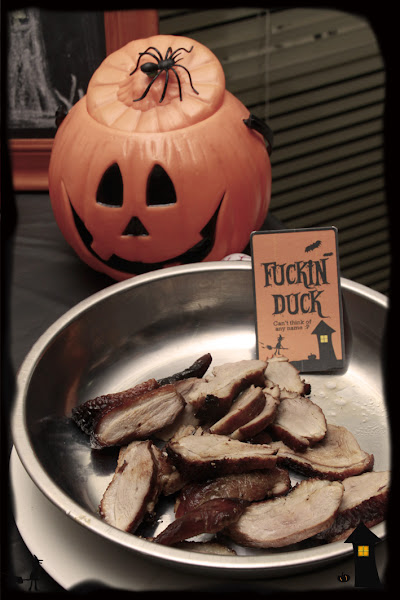 I don't have a recipe for this because Franky prepared this. It's tender and taste good!
The reason why I named it Fuckin Duck is because while I was thinking for names for the labels at home, Joe & I can't think of any names for this dish! We don't know whether it is roasted or fried. We think for quite a while, gave up and Joe said "Fuckin duck..so hard to come up with names for it."
I turned and look at Joe. That is a freaking good name! I type it and printed the labels!
Hey! At least everyone loves that fuckin duck!
Brain Shots. Recipe. 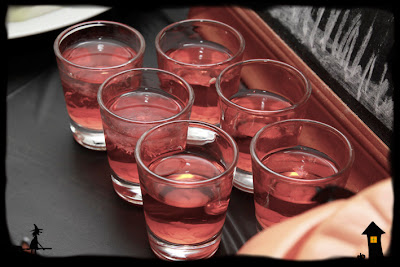 This is a easy recipe and need 4 ingredients.
- Cranberry Vodka
- Baileys
- a straw
- a cloth (wipe the straw after you have the bailey in the straw and before you dip it into the vodka to create the brain) 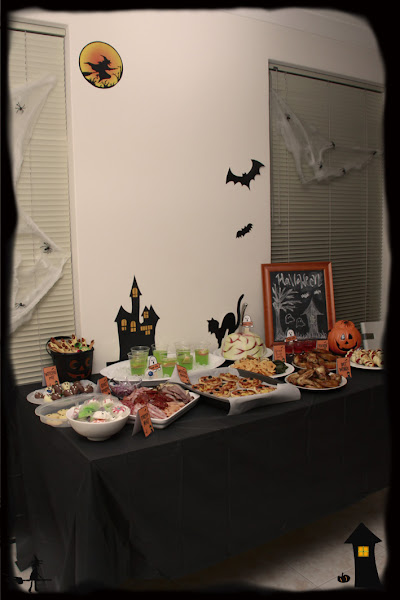 Alan did the honour to chop Freddy's brain into half and I chopped the rest. hehe.. Good bye Freddy. I hate you. Nom nom nom. 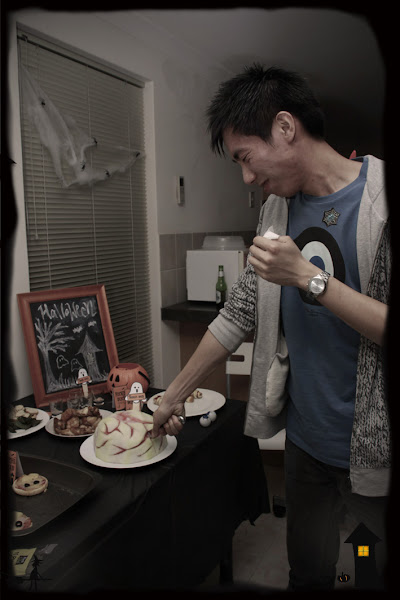 After a meal of craziness.. Angel and I hid in the kitchen putting the cake together that we did the night before. 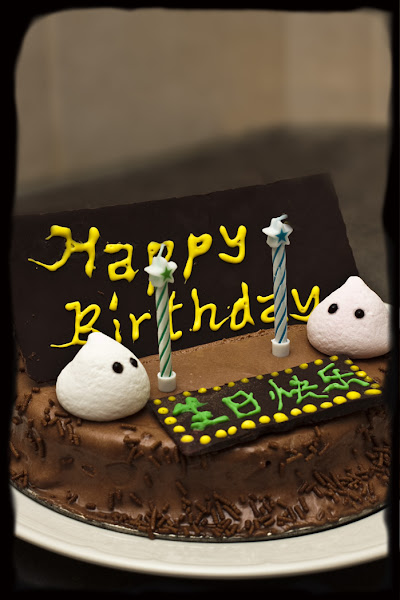 Don't you think the marshmallow is so cute?? I got it from Coles and it comes in pink and white. The only marshmallows that shape like this. Put 2 black dots on it and there you go! A very fat and chubby cute ghost! :D 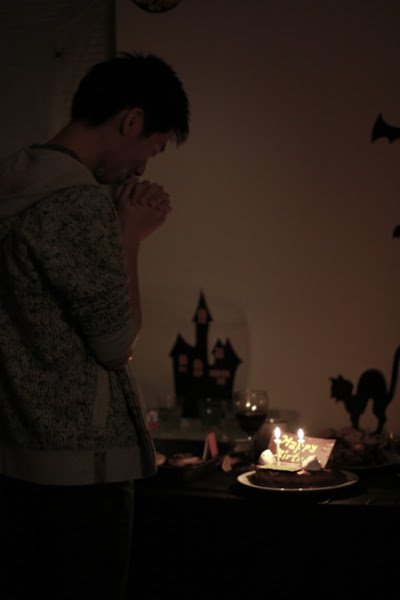 I think Alan is wishing for more marshmallow ghosts... :D 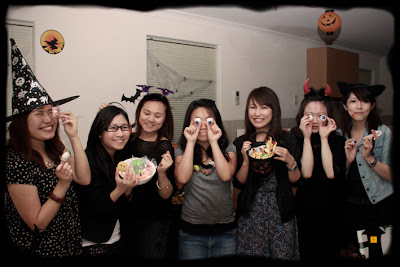 Anyway, I was so happy with the outcome! Never thought it will turned out to be a success! I wanna have Halloween party every year! hahaha it's fun! 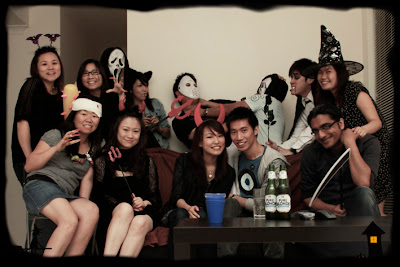 Happy Halloween everyone! Hope you have a scary weekend!

AWESOMMMMEEEEEEE! Wey you are so creative and a great cook!!
Mom's reaction:
1. fingers "eeeeeeeeeeeeeeeeeeee!"
2. brain "wah what is that which looks like a brain?!"

Happy Birthday to Alan from my family!!!

I can go back and cut the Freddy's brain for you next year :P I know you hate Freddy. hehe

You are so creative and talented! What a magnificent effort you went to for this (and your other parties). You should look at being an events planner with those skills!

You are too kind but I don't think I'm good enough to be an event planner ! haha

wow wow wow! the photos looked so great! u all must have a really fun party! Good job with all the decor and my, the food!! thumbs up!

Thanks Lil!! :D
I think I'm in love with party decorating and planning! haha