Bunkasai! It's my second time there and I'm still loving it! The last time that I went was 2 years back with Alice. If it's not because of her, I won't know Bunkasai exist in Perth! There's something about Japanese food, culture, language and stuff like that fascinates me. I'm sure most of you will agree. They are just special! :D 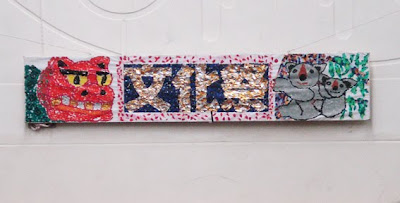 Made my friends went there at 9am sharp. I thought everything (performance and stalls) will start at the same time like the last time, unfortunately they have changed. They start with Performances first then stalls. 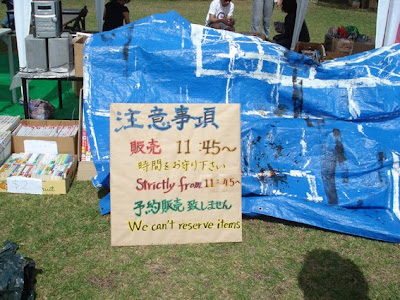 Which means.. I can't have breakfast there! I have to wait for 2 hours to get my food! Oh nooo... I'm gonna be soooo hungry... 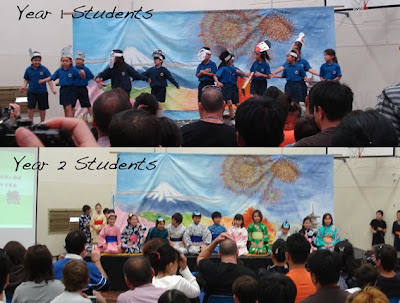 Went to the hall and was entertained by all these cute lil fellas! They are soooooo cute! Singing and dancing in Japanese makes me feel like I'm in Japan. They were all in kimonos running around performing. I'm surprised to see 30-40% of the kids were mix. Cute max. 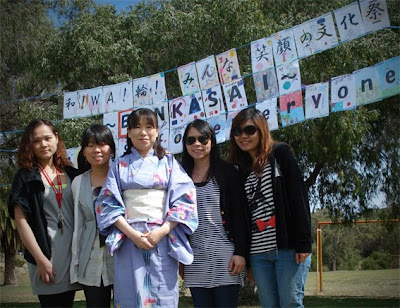 After 1 hour of sitting and looking at the performances that we don't understand (they are all in Japanese!) We decided to go out and start hunting for food eventhough it's not 11.45am yet. We were hungry and restless. Just head to the food stalls and grab whatever we can straight! 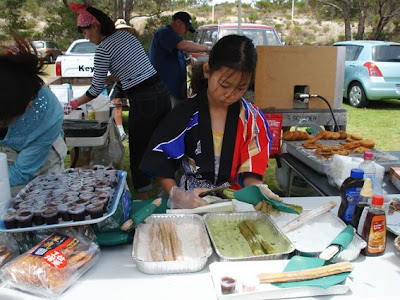 Anyway, I will cut down on the photos of what did I ate there in the festival for this post but show you some other cute stuff instead.
Photo above: Best Green Tea Churros! LOVE IT! 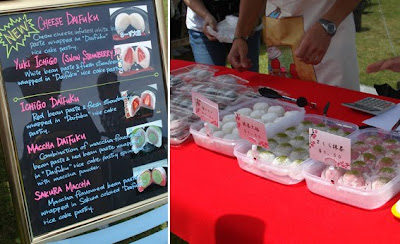 But before that, I just wanna show you this one. Cheese Daifuku. Gosh it's sooooooooo good! It tasted like the Japanese baked cheese cake but softer in texture! I love it! Unfortunately I cant buy more to bring home because the weather is so hot today. The queue was long and I was just half way in the festival. or else.. I will be enjoying the cheese daifuku now. 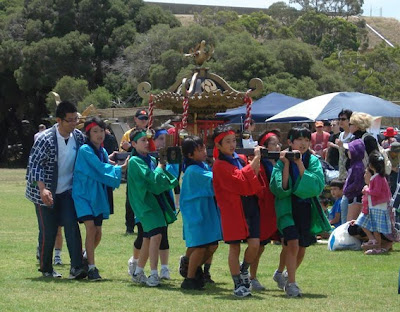 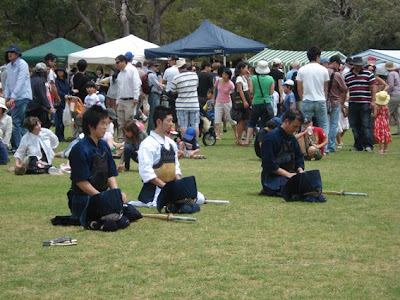 Saw Joe's friend, William. He was performing Kendo in the oval. Interesting. 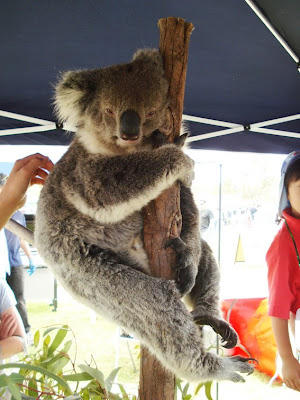 and my favourite Koala~~~
He is sooooooooooo cute! He sat there the whole day look half asleep eventhough people patting him and kids were poking him a little, he just sat there, no movement. Damn hillarious.
Then suddenly he did the loooooong stretch. 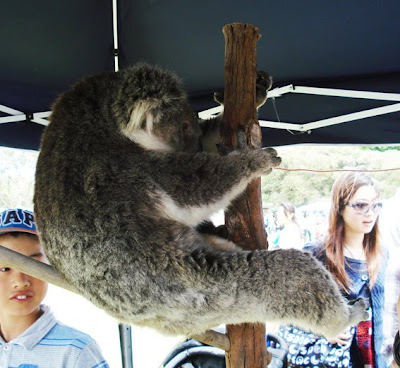 Hiaaaaa....!
and he was on this position for another few minutes, without moving.
So I get to snap his lil foot! 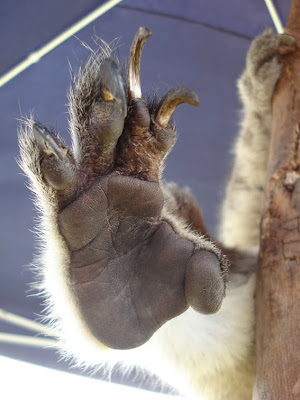 My friend said he got a good career line -_-"
hhahhaha I think he will live for a very long time! 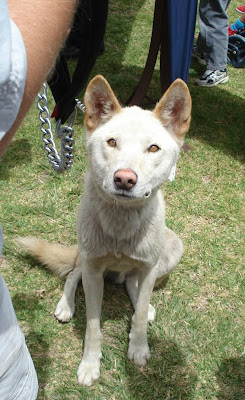 The Dingo. It was my first time to see Dingo. He is skinny and very obedient. 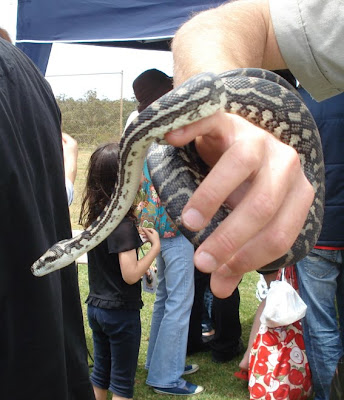 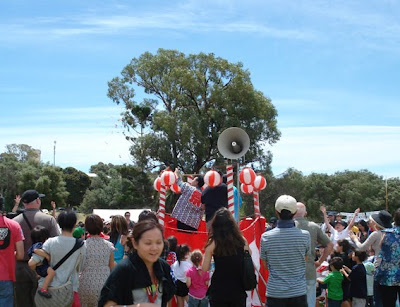 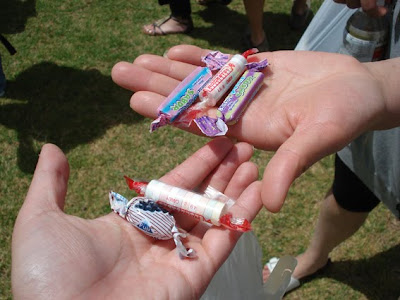 Then at around 12.45 ish, they got some guys standing in the middle of the oval throwing candies to everybody! The kids were so happy and like a maniac picking and catching the candies everywhere! It's like picking gold!
Well, I got some gold myself too hehehe. I feel it's such a nice thing to do, although it's just candies, but it makes people feel happy and excited. Maybe I should throw candies at someone who have a gloomy face. They might smile at me and say thank you. :P
Okay......that won't work. 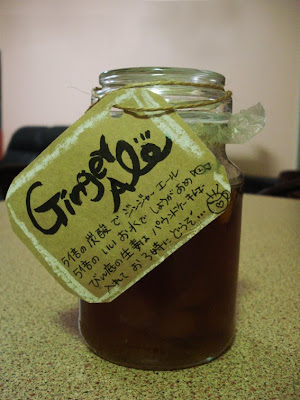 I bought the homemade Ginger Ale. Tried it at the festival and I fell in love with it. Not sure what's the full ingredient, but pretty sure there's honey, ginger, star anise and chilli! You just need a teaspoon of this and add in soda water. It taste really refreshing! It's just right for summer time~! 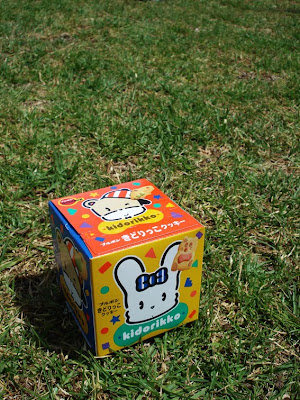 I had the most fullfilliest day in the festival today with my girl friends. Eat, shop, petting animals, laughter, entertainment and lots more. What else can I ask more?

Such an event exists in perth?! woaw!
I need to go here next year. I love your blog btw!! Best food blog in Perth I hv to say

helo mayo~
yeaps, they have it every year around this time :) it's one of my favourite event!
Hey, thanks for the comment hahaha I blog about anything though.. but food is the main part of my life. Welcome to my blog and welcome to PErth :)

Thanks! I've been reading your blog for a while actually..
*I'm such a stalker* T.T
ahahaha.... look forward to reading more ^o^

ahhaha i just realised I said welcome to Perth to you.. Should be Welcome to the Blogging world instead!
Eat more! :)