I have been crazily busy over the weekend! It was Joe's birthday party on Saturday night.

It was a full on day for me because I have been preparing his present, organizing the party, editing the video (Homemade Masterchef Video from the trip in Margaret River) for showing it on that night and cleaning the house. Although I'm running around like mad but I think I love planning parties haha! It's fun! Especially when you see everybody enjoyed themselves and to see the birthday boy so happy.

First, we all went to have an awesomely full Korean BBQ at Cora. Cora is one of our favourite place to eat, because of the quality of food and unlimited food to eat. I love it. 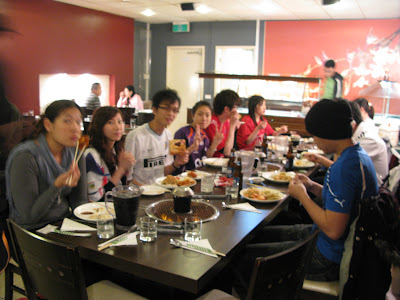 Guess which country are we wearing? 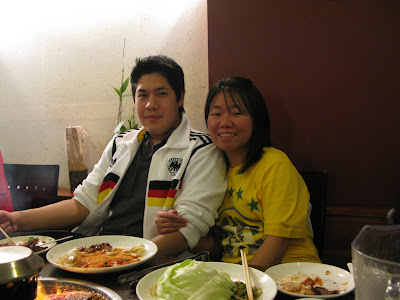 After dinner, we all head back to Joe's place and had some drink and the Fuzzball World Cup Competition! 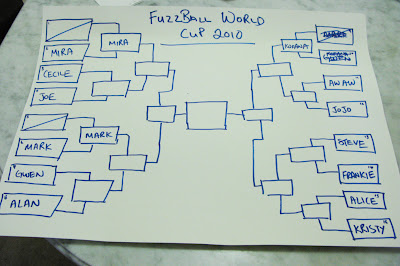 The game was insanely intense! I tell you, it is more tiring than playing the real soccer! Everybody was cheering and yelling when the ball is rolling up and down the table! It was great!
You will know when you watch the video. 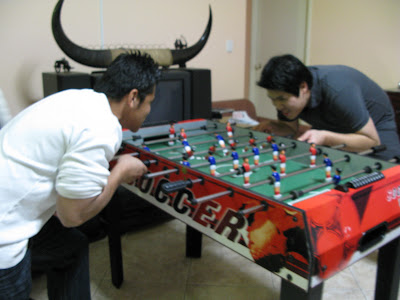 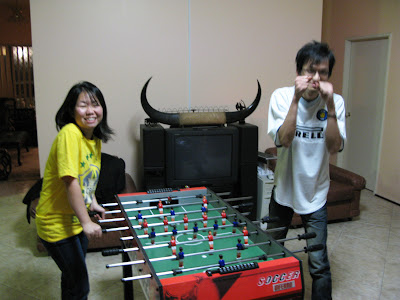 Guess who wins the game?? 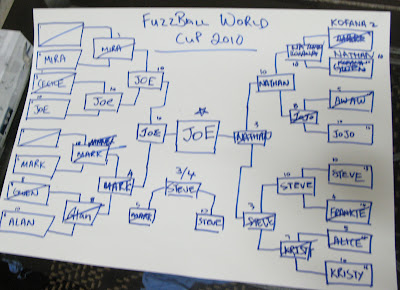 After the game, the clock was just right at 12am which is time to sing the birthday song and cake time for Joe! 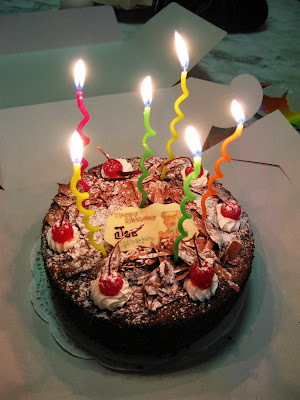 I got his favourite cake, Black Forest, from the Regent cake house in Northbridge.
Then present opening time~ 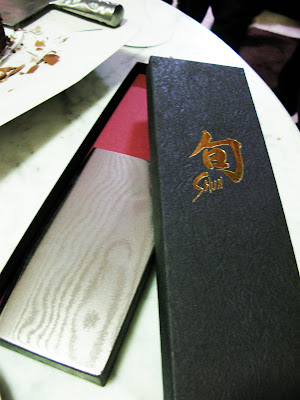 Joe got a freaking awesome + expensive Shun knife! He always wanted to buy a good knife for himself but it's just too expensive. He loves it so much, he has hide the knife somewhere in the kitchen so nobody can use it except himself.

I have tried holding it and it feels soooo goooood! It's so different from those cheap ass knife! The handle, the weight, the quality is just top notch man.. 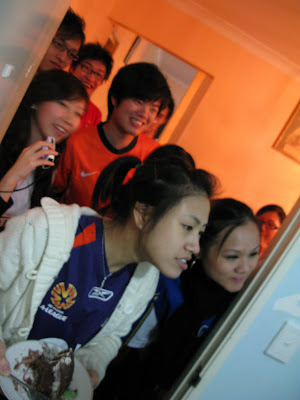 Are you wondering what Im giving him for his birthday? Well, I have bought him 2 very nice jackets for him a month ago and had to let him wear it because of the weather, but I like giving presents on the birthday itself! So I got him a second present :) 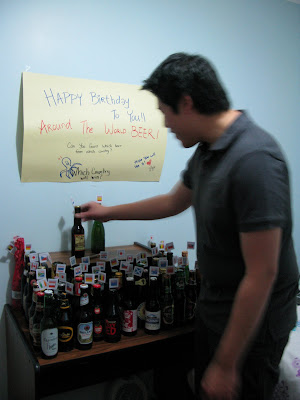 Beers from all over the world!
52 of them! That makes it a whole year (1 per week) supply of beer! I think this should be every guys dream present. Well, maybe most of them anyway. hehe. He was shock to see that I actually printed the flags, labeled them and stick them 1 by 1 on to the bottle itself!

I have put 2 bottles on top, which is the Holland beer and Spain beer for the World Cup.
Which country will win? 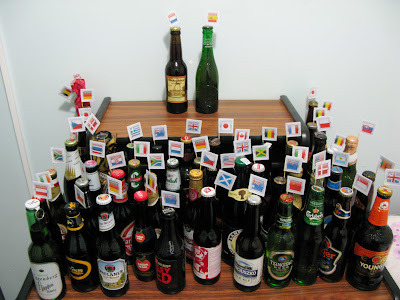 To be honest, while I was doing the research of the beers and the flags, I actually learnt something from it! I know I probably will forget tomorrow but it's quite interesting and collecting 52 different beers from every country is just impossible.

He asked me when did I get them because he didn't see it around the house! Hey man.. it's a surprise haha! I have hide it under the bed in the other room and only goes to that room after he went to bed at night to go through it 1 by 1 so that I know what flag to print. So fun haha it feels like a secret agent :P 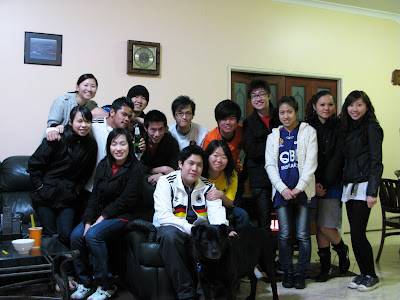 We continued our night by watching the Uruguay and Germany match at 2.30am.
I didn't sleep til 5am in the morning. That's not crazy enough.. Joe and 3 other guys actually stayed up til 7am playing mahjong! Thats insane!

Happy Birthday to you Joe! You are one year older again! :)


If you are interested in getting the beers around the world, go to the International Beer Shop located in West Leederville. They got a 20 bottles around-the-world pack ready in stock cost about $75.

OH MY GOD! You are such a damn good event organizer! hey think of something different for our house warming la! (even tho you wont get to participate :p)

wahliao u got nth to do man

je: how to plan leh~ i duno anything about the house! hahahhaha

what do you need to know about the house? :p
faster help plan! :p

Dream baseball is detonating throughout the years as a result of the general population love the MLB and Fantasy Sports enable them to pursue considerably nearer.안전놀이터