Im sooo in the mood for Masterchef. I'm crazily in love with Masterchef. I just wanna cook a storm up in the kitchen!

I was given the First Season Masterchef Cookbook from Alan and Cecile 2 months ago and finally I am ready to take the challenge. Wahahahah! crazy -_-

My Challenge for today was Poh's Century Egg Dumplings in Pork Congee. 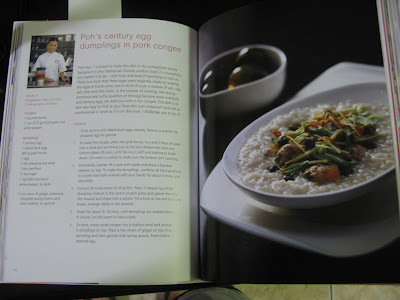 I have never cook congee before therefore I was a bit worried that it will turn out to be watery or weird taste. To tell the truth, I have not been cooking for quite a long time now. Getting rusty. 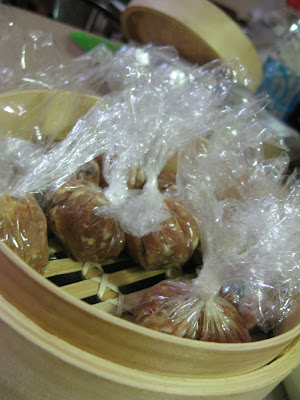 It took me quite a while to get everything ready because I read the instructions over and over again just in case I miss out anything. The picture above is Century egg, Salted duck egg and minced pork dumpling that is going to the steamer.

After 1 hour and half of messing the kitchen and with a lil help from Joe, my congee is finally done.
Tadaaaaaaaaaa!!!!!!!! 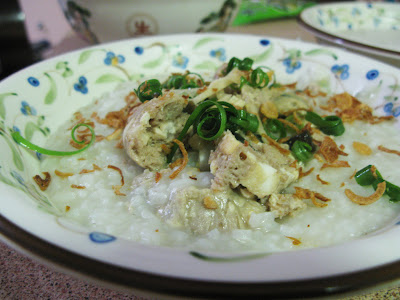 Not bad isn't it?? My first and ever best tasting Congee ahhahaha
not like I did a lot of times before.. :P I felt happy cuz I didn't screw it up hehehe

For the taste, honestly the dumpling was good but there's not really much taste on the congee itself. So for people like Joe who likes heavy taste, shall put a bit of white pepper, soya sauce or probably red vinegar to enhance the taste of it. But for me, it's just nice. Plain and a lil bit of pork flavor. Click on the picture above if you want to have a look at the recipe! I think should be readable online :)

The real reason why I chose this dish instead of other is because Joe was not feeling too well, so I just wanted him to have something not oily. He is not a congee kind of person but luckily he loves it! hehe! My first successful congee!