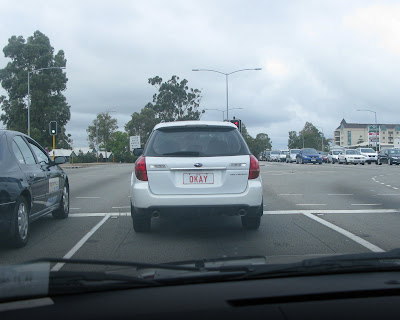 Do you know where the word OK come from?
Can you guess it?
Give you a hint. 2 syllabus.
.
.
.
.
Okay, the word OK is actually from the word ALL CORRECT.
Funny ain't it?
Long long time ago, maybe about 1920s, The Americans was in a craze of playing with words. For example like this one, A became O, C became K. It's just like the youngsters nowadays. They chat using tons of short form like TTYL (talk to you later) and type the word Kool instead of cool.
Amazingly OK is the only word that is widely used in the world.

Of course I didn't find this out myself haha! I'm not that smart! :P
Joe and I was in the car on the way home and the car with OKAY car plate number was in front of us. So, I took the picture and he told me the story :)
Learn something new everyday ey!

Email ThisBlogThis!Share to TwitterShare to FacebookShare to Pinterest
Labels: others

1. i didn't know that either.
2. okay is a really cool car plate. i like.
3. the labels are definitely long overdue :)