Today is quite a unexpected day for me. Well, this morning I brought my car to service, Joe followed me to the service centre so that I don't have to wait there. We went to get his things done for his new job then head to the city to have lunch and walk around til the time to get my car.
Thats fine in the morning. Until on our way to get my car, he was telling me that it's time to service his car as well, and felt something is wrong when driving. Like 10minutes later, his car broke down. I was like.. wtf. Got out and checked his car, he saw the engine light came off, so he suspects that maybe the engine was leaking while he is away. So, we went to pick up my car then we went to petrol station to get engine oil. Back to his car, poured in the engine oil, start the car, it struggled abit, start it again a few more times, then it sounds fine after that. So off we go. (Heading home) Drive probably about 5 minutes, his car exhaust pipe start to blow out SMOKES! The main road is covered by his smokes. He quickly turn in to some housing area and stop. I was behind following him and I was like wwooooouuuu....!! I got down and told him that's too much engine oil! (it happen to me before, smart ass me poured the whole bottle in haha) But thats just imposible! Cuz the engine oil lights came off! He checked again, found out that it's the Coolen is finished. So, now we need to get the engine oil out from the tank to stop the smokes from blinding everyone on the street. But we don't have any equipments. Decided to head home, get stuff and go back there and fix it. Got home, get stuff, did some research on why the car is making some kind of noise and off we go. Back there, jack up the car, ready to unscrew the nut. Tried to unscrew it for probably 15minutes, he gave up. It's the wrong wrench. (We even tried to borrow the wrench from the guy live nearby there, but fail too) Again, head home, get wrench. (1 way from that place to home maybe takes us bout 20minutes) Back there again.....Fixed finally. Start the car and off we go. On our way back, I still see some smokes coming out of his car but not as bad. Saw other ppl pointing at his car too! But hey, we really got no choice man. We really need to bring that car back home to get it fixed. When we were nearly home, Joe saw the light came off again. Open the boot and realise smokes coming out from there now. No choice, had to leave his car there to cool down and pick it up later. (thats what happen when you didn't drive your car for few weeks. it driessssss up.)

Don't need to read those if you need to save time.
In short, my car service for today was easy and expensive.
Servicing his car was time consuming, good learning process, sweat, tiring BUT cheap :)
Which one do you prefer? 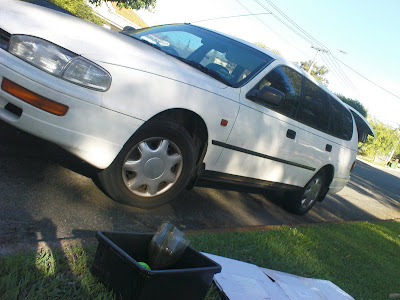 Email ThisBlogThis!Share to TwitterShare to FacebookShare to Pinterest
Labels: Joe

i guess its not solely the sticky pedal problem after all.