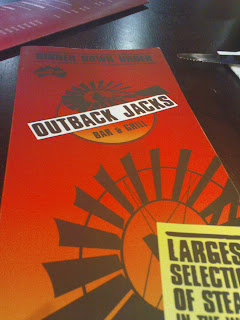 It is quite a spacious restaurant and the deco was interesting.. because there is a BIGGG Crocodile hanging on top off the ceiling! its So BIG, it is probably 4 or 5x of my size. It's cool.

The waitresses were very attentive. In fact, it's TOO attentive that we felt irritated by her.
She came to us every 2minutes and ask if we wanted to order some drinks. She recommended Cosmopolitan which is on special, at least 5 times and sadly, after taking a sip, it doesn't taste very good.

Ordered a few meals to try out.
For entrees 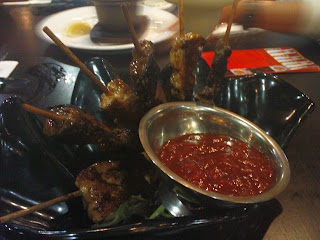 This dish taste pretty decent. Compare to the ones that I ate in Hippo creek, the meat is more tender. Sautéed prawns, tails on, in a spicy chilli
tomato sauce on a bed of rice,
served in a mini camp oven.

Apparently suppose to be spicy, but not sure if it's my tongue or the chef forgot to put chilli in it, It's not spicy at all. But it tastes good. :)

As for mains, we got the Surf and turf 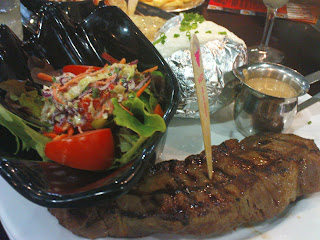 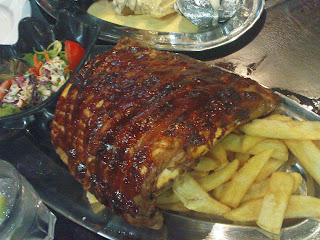 Looks pretty good huh.. It is quite good, but if I would rate it, i will only give 2 stars.
Reasons for it is because the steak in OBJ is comparable with the ones in Hog's breath. It was a bit rough.
The ribs, not much meat, not really juicy and Lacker's grill taste wayyyy better than OBJ's Ribs.

Oh! If you are very hungry and has not much money to order a lot of food, maybe you should go to OBJ to take the 1KG steak challenge! Eat 1KG of steak in 30mins, u will get 50% discount and get a FREE T-shirt! Not too bad at all! :)