It was a boring friday, my colleague Brooke receive an email from Ron, one of the reps from my work place, saying his container of lollies is gone! He emailed everybody saying that our office has a pest problem, a real big rat or seomthing has taken his lollies. Brooke was curious so she asked the other colleague who is in the same office as Ron. She told brooke that it was a prank from her and Peggy. 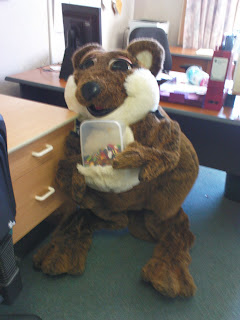 Well, Jen and peggy took the broken mascot from the basement and "beautify" it. Just to prank ron. poor ron hahaha. thats what they did to the poor "rat" who stole the lollies, just to SCARE ron. Good one! 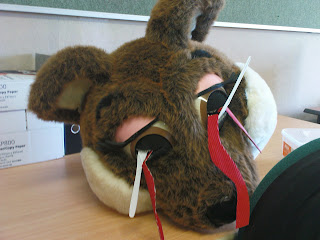